VeloKey is a Keyboard for your bike.  I know.  I know what you are going to ask: “Why do you need a keyboard for your bike?”  Well, I guess you don’t.  This is the story of a failed project.  We break down why and how this project failed in hopes to learn from the experience.

First let me remind you why we thought VeloKey might have made a viable product.

Project goals:  Many people ride bikes indoors for hours at a time.  They use a computer to: run a training program (virtual world), watch videos, browse the web, and read email.  These activities could be made easier with a cycling specific computer interface.

A full QWERTY keyboard would be too cumbersome to operate while you are pumping out the Watts, so we simplified the interface to three scroll wheels, a display, and a few buttons.  If you need to author your manifesto, then by all means use a different interface.  VeloKey is meant for typing the first few characters of a web address, not a dissertation. 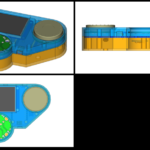 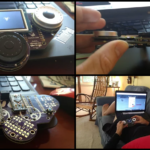 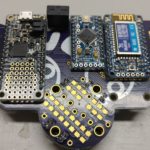 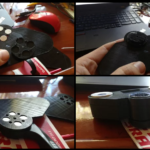 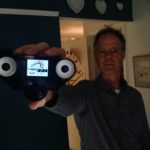 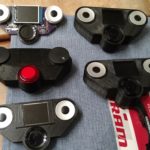 The design is centered around the Feather M0.  This M0 has plenty of program memory if you are used to programming AVR 328s found in the Arduino Unos.  Its a fantastic little ship with multiple hardware serial ports, can act as an HID keyboard and mouse (which backs up the Bluetooth) and is well documented.

We used an arduino pro mini to provide guaranteed encoder readings.  Kevin did have some luck reading the encoders directly from the M0, but never all three at the same time and also not with background tasking.  Using the Pro-Mini was a quick and rely able way to implement the encoders.  The Pro-Mini is connected to the M0 via a serial link.

The EZKey module provides the Bluetooth HID interface so that VeloKey does not require any software modifications on the host computer.  The EZKey is connected to the M0 via a serial link.

The software was developed using Arduino.  Upon startup, VeloKey launches into a software defined default mode (typically mouse mode).  Scrolling the middle wheel allows you to change modes from mouse, to keyboard, to program, to movie.  Modes are defined in an extensible object oriented manor so that VeloKey will play nicely with community defined modes.  The Pro-Mini translates encoder events into serial events and sends them to the M0 where the events are handled.

The beginning of an extensible API was created to test VeloKey as a gaming platform.  A few basic sprites and widgets were defined and the API was used to create Pong and Asteroids.

Cause of death: Lack of interest.

The main reason VeloKey Failed was negative feedback from three sources.  First, the local bike shop said that “VeloKey” solved a non-existent problem.  A virtual training company rejected hardware in favor of their phone app. And finally, a beta tester said that it was too distracting.  Three strikes and VeloKey is out.

If it weren’t for these technical factors, we’d probably still pursue a crowd funding campaign.  After all we have a lot of effort invested in VeloKey.  Before we launched, we’d have to solve this technical issues and that would take more investment of time that we felt would not pay returns.

VeloKey or something like it may be useful as a mobile computer interface, or game platform.  We tested it out with Pong and Asteroids.  The update rate was a little on the slow side for any graphic intensive games.