In issue 31 of HackSpace magazine, out today, PJ Evans looks at DIY smart homes and homemade Internet of Things devices. 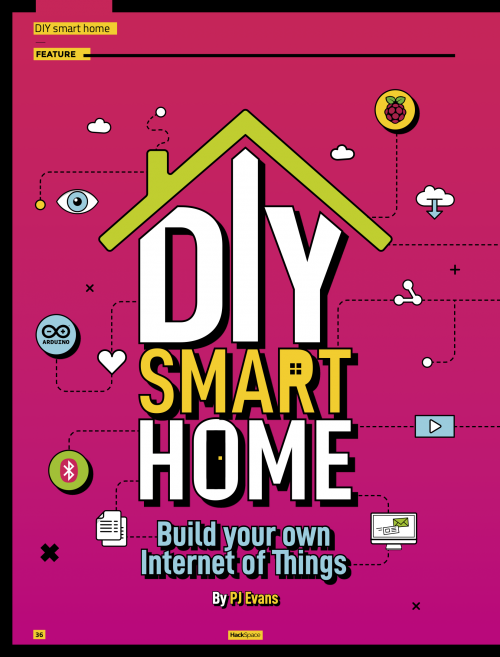 In the last decade, various companies have come up with ‘smart’ versions of almost everything. Microcontrollers have been unceremoniously crowbarred into devices that had absolutely no need for microcontrollers, and often tied to phone apps or web services that are hard to use and don’t work well with other products.

Put bluntly, the commercial world has struggled to deliver an ecosystem of useful smart products. However, the basic principle behind the connected world is good – by connecting together sensors, we can understand our local environment and control it to make our lives better. That could be as simple as making sure the plants are correctly watered, or something far more complex.

The simple fact is that we each lead different lives, and we each want different things out of our smart homes. This is why companies have struggled to create a useful smart home system, but it’s also why we, as makers, are perfectly placed to build our own. Let’s dive in and take a look at one way of doing this – using the TICK Stack – but there are many more, and we’ll explore a few alternatives later on.

Many of our projects create data, sometimes a lot of it. This could be temperature, humidity, light, position, speed, or anything else that we can measure electronically. To be useful, that data needs to be turned into information. A list of numbers doesn’t tell you a lot without careful study, but a line graph based on those numbers can show important information in an instant. Often makers will happily write scripts to produce charts and other types of infographics, but now open-source software allows anyone to log data to a database, generate dashboards of graphs, and even trigger alerts and scripts based on the incoming data. There are several solutions out there, so we’re going to focus on just one: a suite of products from InfluxData collectively known as the TICK Stack.

The ‘I’ in TICK is the database that stores your precious data. InfluxDB is a time series database. It differs from regular SQL databases as it always indexes based on the time stamp of the incoming data. You can use a regular SQL database if you wish (and we’ll show you how later), but what makes InfluxDB compelling for logging data is not only its simplicity, but also its data-management features and built-in web-based API interface. Getting data into InfluxDB can be as easy as a web post, which places it within the reach of most internet-capable microcontrollers.

Next up is our ‘K’. Kapacitor is a complex data processing engine that acts on data coming into your InfluxDB. It has several purposes, but the common use is to generate alerts based on data readings. Kapacitor supports a wide range of alert ‘endpoints’, from sending a simple email to alerting notification services like Pushover, or posting a message to the ubiquitous Slack. Multiple alerts to multiple destinations can be configured, and what constitutes an alert status is up to you. More advanced uses of Kapacitor include machine learning and anomaly detection.

The problem with Kapacitor is the configuration. It’s a lot of work with config files and the command line. Thoughtfully, InfluxData has created Chronograf, a graphical user interface to both Kapacitor and InfluxDB. If you prefer to keep away from the command line, you can query and manage your databases here as well as set up alerts, metrics that trigger an alert, and the configurations for the various handlers. This is all presented through a web app that you can access from anywhere on your network. You can also build ‘Dashboards’ – collections of charts displayed on a single page based on your InfluxDB data.

Finally, our ’T’ in TICK. One of the most common uses for time series databases is measuring computer performance. Telegraf provides the link between the machine it is installed on and InfluxDB. After a simple install, Telegraf will start logging all kinds of data about its host machine to your InfluxDB installation. Memory usage, CPU temperatures and load, disk space, and network performance can all be logged to your database and charted using Chronograf. This is more due to the Stack’s more common use for monitoring servers, but it’s still useful for making sure the brains of our network-of-things is working properly. If you get a problem, Kapacitor can not only trigger alerts but also user-defined scripts that may be able to remedy the situation.

Get HackSpace magazine issue 31 — out today 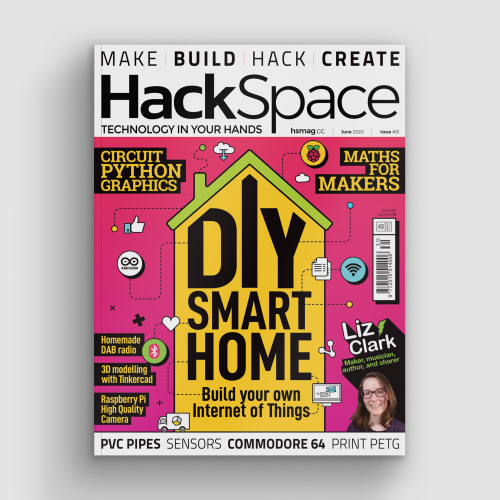 You can read the rest of HackSpace magazine’s DIY IoT feature in issue 31, out today and available online from the Raspberry Pi Press online store. You can also download issue 31 for free.

The post Design your own Internet of Things with HackSpace magazine appeared first on Raspberry Pi.