Over the past few years, we have seen the micro:bit grow into one of the most useful programming tools available. Here at SparkFun, we even developed and released a whole ecosystem of carrier boards and kits for it. The micro:bit became our top selling educational platform within a year of its release. Since then, it has been a steady rock for STEAM education in a time of uncertainty while most students participate in school at home. The micro:bit is easy to program, easy to administer and affordable enough to send home with students. 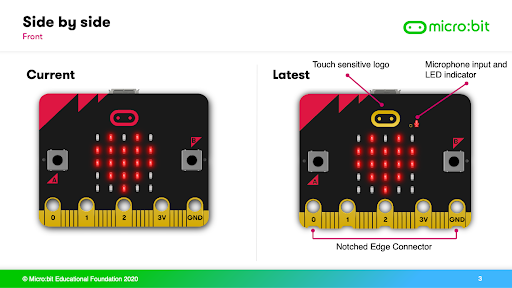 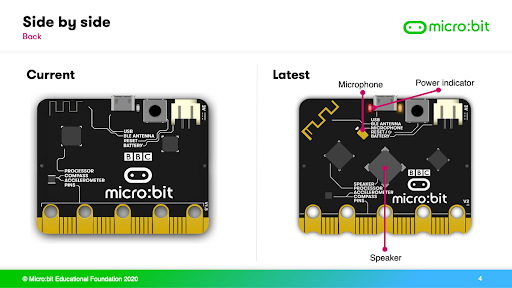 Before jumping into the new additions, here's a quick comparison for you table nerds out there. 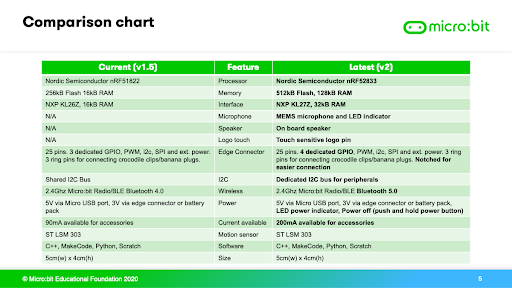 Not that the older version of the micro:bit was a scarecrow by any means - it was pretty hefty in terms of computing power - but there were some users, specifically those looking to get the most out of Bluetooth, who were pushing the micro:bit to the limits. 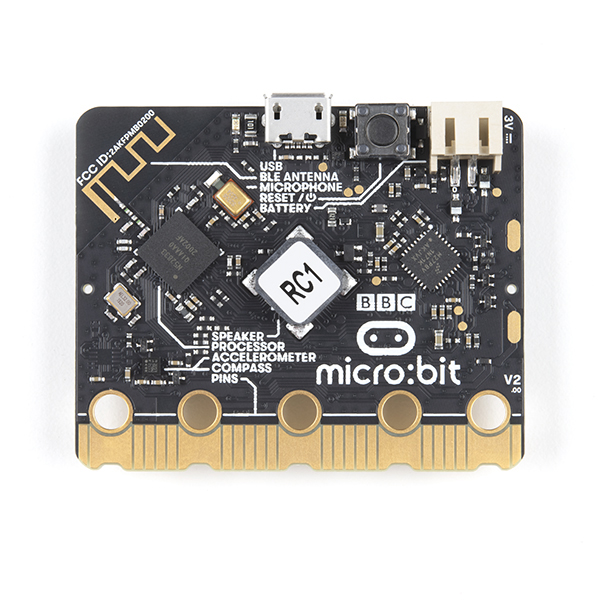 The micro:bit 2.0 sports a new Nordic nRF52833 and doubles the amount of flash memory on the board. This updates a number of features, speed and power consumption on the micro:bit. One thing we are looking forward to is its potential to open the doors to Artificial Intelligence (AI) and machine learning (ML) for your micro:bit projects (this is just us speculating - there is nothing to point at in terms of the micro:bit Foundation and its partners rolling out AI/ML out of the gates, but it does have potential in the future). We will keep an eye on this prospect.

Since the release of the original micro:bit, students have always been able to have fun programming the micro:bit to play music and sounds, sometimes through an external speaker. This was always a bit of a letdown for those getting into micro:bit, as it was something they had to add on to the hardware. 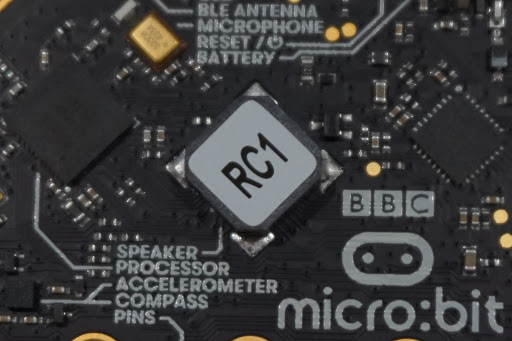 We’re glad to see that the micro:bit 2.0 has a built-in speaker. The speaker is on the back of the micro:bit 2.0, and I can tell you from experience it is as loud and annoying as the external speakers that we include in our kits. Now your students can make a noise machine, set up a burglar alarm or build a musical instrument using just the micro:bit itself. Oh, joy! 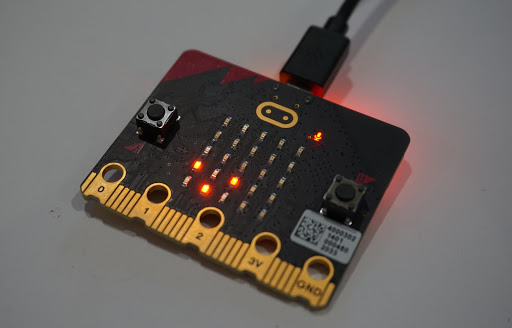 Along the lines of sound, the micro:bit 2.0 also has a microphone. This was a wonderful addition to the on-board sensor suite of the board. At first I was skeptical about the quality of the microphone and how clean its inputs would be - would it be too sensitive, or not sensitive enough? However, I was wonderfully surprised by how responsive the microphone was and, at least when combined with the bar graph functionality on the LED array as a graphical output, how consistent and clean the signal was. Between the microphone and the speaker this opens up a whole possibility of new projects with just the micro:bit alone! 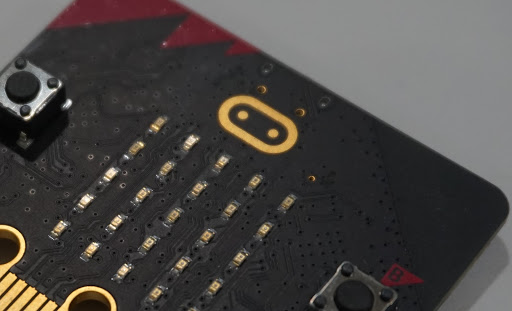 Comparing it to a previous version, you can see that the logo is no longer part of the silk screen, but actually metal. Another wonderfully simple input for this little board.

While not the most flashy collection of updates to the board for most people, for those looking to push the limits of the micro:bit, v2.0 features BLE 5.0. This change opens up a number of potential avenues in terms of communication with other devices such as phones, laptops, etc.

At SparkFun, we also like the change to a dedicated I2C port, as many of our accessories such as the moto:bit and weather:bit communicate with the micro:bit via I2C. This means a more stable and consistent user experience.

Another update to the micro:bit 2.0 that you may have noticed are the small “bites” taken out of the edge connector. 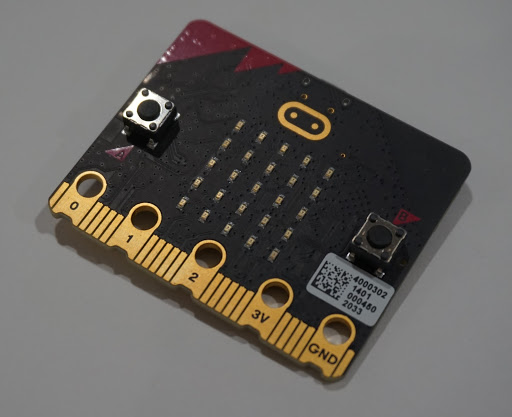 These are there to make it easier to connect external components to the micro:bit with alligator clips without them sliding around, falling off or shorting on other pins. I can tell you from personal experience, this small and seemingly simple modification is a big deal and improves prototyping greatly.

Last but not least, the additions of a few updates around powering the micro:bit and its output. The micro:bit 2.0 includes a way to turn it on/off from the board. Those of you that have burned through batteries when students leave the battery packs plugged in will understand the value of this!

Another great update for those who do a lot of tinkering with external components and the micro:bit is that the total output current through the micro:bit v2.0 has been bumped from 90mA to 200mA. This is great for driving more than one or two LEDs before things start to go dim. There are also a few improvements for the power inputs as well, but I will wait to test those in more depth until I have more than one on my desk.

After reviewing the board and being hands on with it, I can tell you that the Foundation put a lot of thought into the updates. They listened to feedback - both from teachers and students, but also from partners. 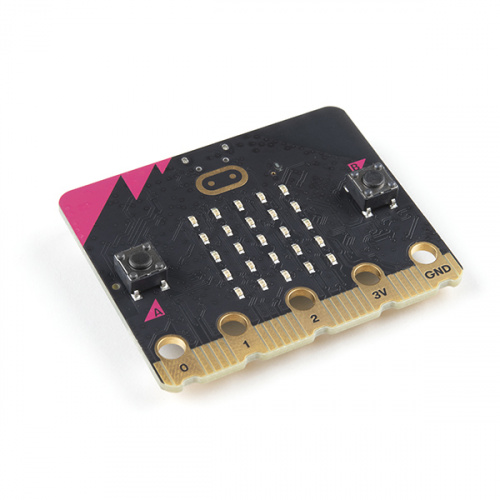 The BBC micro:bit v2 is a pocket-sized computer that has been updated with additional features that let you get creative with… 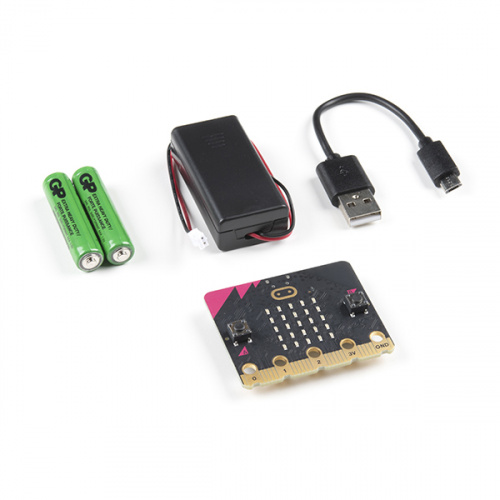 The micro:bit v2 is a pocket-sized computer and the Go Bundle provides you with everything you need to get hooked up and powe…

The Go Bundle is a quick and economical way to get started with the micro:bit v2. So gather up your crew, give your club a co… 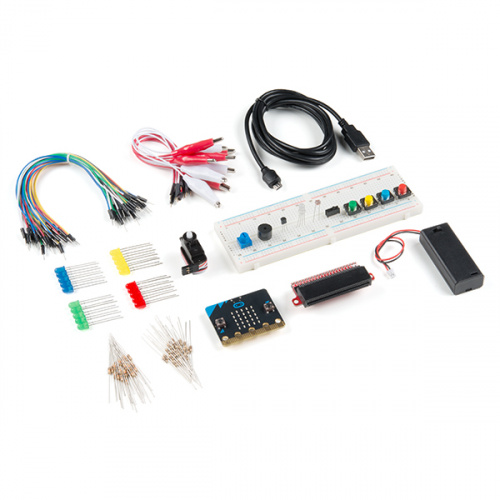 The SparkFun Inventor’s Kit (SIK) for micro:bit v2 is a great way to get creative, connected and coding with the micro:bit … 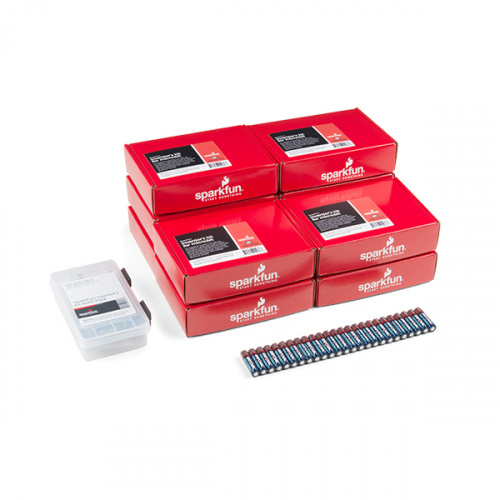 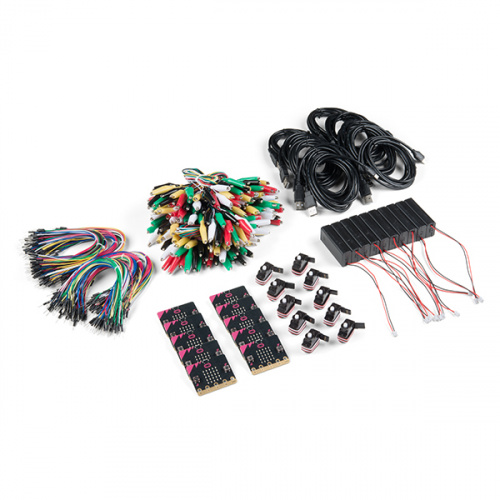 The micro:bit v2 Educator's Lab Pack includes10 micro:bit v2 boards and everything you need to get you started with the new l…

We will be testing out our existing micro:bit ecosystem of carrier boards to make sure that everything works and is as compatible as we can make it. We may even sneak some new content in there for those of you that are early adopters of the 2.0. Keep an eye out for updates from us on our social media channels, newsletter and video releases.