The SparkFun RP2040 Thing Plus is awfully enticing to use for machine learning...not only does it have 16 MB of flash memory, but the RP2040 SoC enables the maximum performance for machine learning inference at the lowest power, due to its energy-efficient dual Arm Cortex-M0+ cores working at a comparatively higher frequency of 133 MHz. 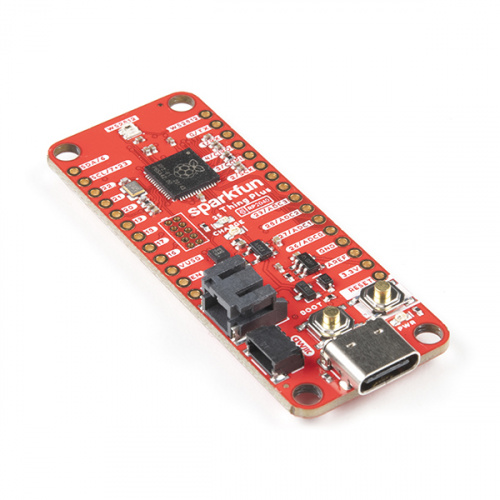 The SparkFun Thing Plus - RP2040 is a low-cost, high performance board with flexible digital interfaces featuring the Raspber…

Since a version of the TensorFlow Lite Micro library has been ported for the Raspberry Pi Pico, we can try to start running machine learning models on RP2040 boards that can detect people in images, or recognize gestures and voices. But beyond that, TensorFlow has documentation for building really useful text recognition machine learning models, including the BERT Question Answer model.

Even if you haven't heard of the BERT Question Answer model, it's likely that you've either interacted with systems that follow the same principles. It's what allows machines to read and comprehend human language and interact with us in return. Developed by Google, it stands for Bidirectional Encoder Representations from Transformers, which basically means it uses encoders and decoders to read text input and produce predictions. The bidirectional part means that it reads the text from both left to right and right to left, so that it can understand the context of a word within its text. Basically, it's the key to building machines that can actually communicate with us, like the chat bots you interact with on the web. For example, you can see how the model might be able to pick out an answer from the passage below. 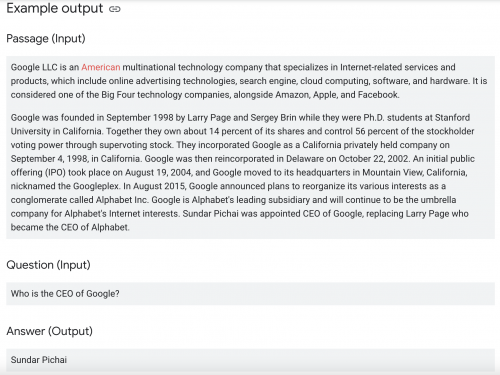 The question is, can it be converted onto a microcontroller like the RP2040 Thing Plus, which has limited RAM and storage and thus places constraints on size of the machine learning model? We attempted this, by training a model through TensorFlow, and then converting it to C files that could be loaded onto the RP2040 Thing Plus and thus fed new data.

TensorFlow has extensive documentation that leads you through training the model, but the amount of code required is surprisingly simple. It comes down to five main steps: choosing the model (in this case it's MobileBert, since it’s thin and compact for resource-limited microcontroller use), loading in data, retraining the model with the given data, evaluating it, and exporting it to TensorFlow Lite format (tflite).

The data we'll be giving it comes from a large scale dataset meant to train machine reading comprehension called TriviaQA.

Running Inference on the RP2040 Thing Plus

Lastly, we can run the model with an input, like the passage below, and see in the console what kind of answers the model produces to comprehend the text. 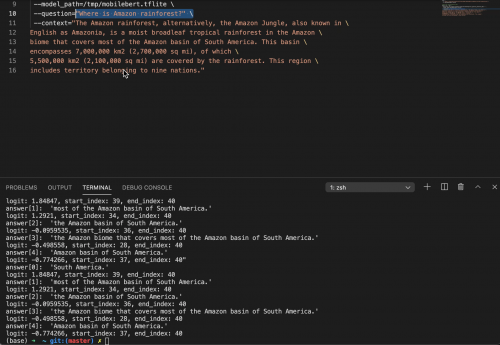 It's quite amazing that a microcontroller can run a machine learning model like BERT, but thanks to TensorFlow, it's possible to run all sorts of machine learning modules. What kind of machine learning applications interest you? I highly reccomend giving them a try on one of the RP2040 boards because they are so well equipped for this kind of heavy lifting. Comment below what you want to try, and happy hacking! 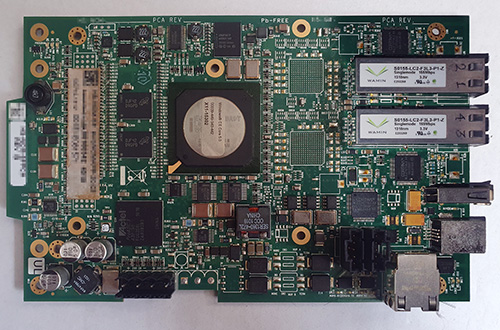 This is an interesting ware that made its way to my inbox via a person who wishes to be credited as simply “Lih”.

I definitely had a bit of trouble guessing its purpose, but certain strange things started to make more sense once I found out. I wonder how quickly others will pick up on the oddities, and piece it together!

The ware is a sampling mixer from an HP 8508A vector voltmeter – foreground is a VCO and step generator that sends trigger pulses to samplers on both of the 2 input channels. The wiper is used to equalize the delay between the two channels. I found Cody’s analysis to be interesting and thought-provoking, so I’ll give him the prize for this month. Congrats, email me for your prize! I was also wondering if anyone was going to squint really hard and see the HP logo, and sure enough Name That Ware regular willmore saw it!

YouTuber Cranktown City recently acquired a new milling machine/drill press, and needed somewhere sturdy to place it. Rather than buying something, he went to work making a nice custom stand with a drawer on top and space for a toolbox below that.

To help keep things organized, this top drawer features a 3D-printed drill index with an interesting trick. In addition to providing storage for the drill bits, it “encourages” you to put them back. Each drill cavity has a small switch, all of which are daisy-chained together. The switch signal is fed to an Arduino Nano, which reads high when all drills are present, and low if one or more is missing. If one is missing for too long, it triggers a sound module that insults him into proper organization, and lights up a strip of LEDs as an extra reminder.

Code and CAD for the project is available on GitHub if you’d like to try something similar!

We're excited to participate in this year’s GTC21 conference, with two great sessions for attendees to watch! While we can't give away too many details right now, stayed tuned for more info and links to our sessions. We can't wait to share what we've been working on!

Haven't heard of GTC21? GTC21 is a great conference held by NVIDIA that focuses on artificial intelligence. This year’s online format allows you to explore the latest in AI from the comfort of your desk, couch, backyard, etc. With more than 1,400 sessions free to attend, this conference covers multiple industries and interests for those interested in AI. Topics range from autonomous machines, to high-performance computing, to graphics and game design, to data science and deep learning, to IoT! The week of AI exploration and innovation starts with a keynote from NVIDIA's Founder and CEO, Jensen Huang. See more details below!

While there are more than a thousand(!) sessions to watch for free, NVIDIA is also offering opportunities for paid, hands-on training with their Deep Learning Institute (DLI). Attendees can spend a full day further exploring topics such as AI, accelerated computing or accelerated data science, and earn an NVIDIA DLI certificate! Explore training available on the conference's site. 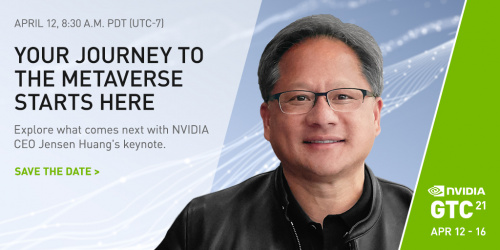 Introducing Piper Make: a Raspberry Pi Pico-friendly drag-n-drop coding tool that’s free for anyone to use.

Edtech startup Piper, Inc. launched this brand new browser-based coding tool on #PiDay. If you already have a Raspberry Pi Pico, head to make.playpiper.com and start playing with the coding tool for free.

The block coding environment invites you to try a series of challenges. When you succeed in blinking an LED, the next challenge is opened up to you. New challenges are released every month, and it’s a great way to guide your learning and give you a sense of achievement as you check off each task.

But I don’t have a Pico or the components I need!

You’re going to need some kit to complete these challenges. The components you’ll need are easy to get hold of, and they’re things you probably already have lying around if you like to tinker, but if you’re a coding newbie and don’t have a workshop full of trinkets, Piper makes it easy for you. You can join their Makers Club and receive a one-off Starter Kit containing a Raspberry Pi Pico, LEDs, resistors, switches, and wires.

If you sign up to Piper’s Monthly Makers Club you’ll receive the Starter Kit, plus new hardware each month to help you complete the latest challenge. Each Raspberry Pi Pico board ships with Piper Make firmware already loaded, so you can plug and play.

If you already have things like a breadboard, LEDs, and so on, then you don’t need to sign up at all. Dive straight in and get started on the challenges.

I have a Raspberry Pi Pico. How do I play?

A quick tip before we go: when you hit the Piper Make landing page for the first time, don’t click ‘Getting Started’ just yet. You need to set up your Pico first of all, so scroll down and select ‘Setup my Pico’. Once you’ve done that, you’re good to go.