FlorinC posted an update on his HDSP clock project:

The only SMD component in the HDSP clock was the USB miniB connector. To make the kit completely beginner-friendly, this connector was replaced by either of its two (right angle or straight) through hole equivalents.

A sci-fi writer wanted to add some realism to his fiction. The result: a Raspberry Pi-based Martian timepiece. Rosie Hattersley clocks in from the latest issue of The MagPi Magazine.

Ever since he first clapped eyes on Mars through the eyepiece of a telescope, Philip Ide has been obsessed with the Red Planet. He’s written several books based there and, many moons ago, set up a webpage showing the weather on Mars. This summer, Phil adapted his weather monitor and created a Raspberry Pi-powered Mars Clock.

After writing several clocks for his Mars Weather page, Phil wanted to make a physical clock: “something that could sit on my desk or such like, and tell the time on Mars.” It was to tell the time at any location on Mars, with presets for interesting locations “plus the sites of all the missions that made it to the surface – whether they pancaked or not.”

Another prerequisite was that the clock had to check for new mission file updates and IERS bulletins to see if a new leap second had been factored into Universal Coordinated Time.

“Martian seconds are longer,” explains Phil, “so everything was pointing at software rather than a mechanical device. Raspberry Pi was a shoo-in for the job”. However, he’d never used one.

“I’d written some software for calculating orbits and one of the target platforms was Raspberry Pi. I’d never actually seen it run on a Raspberry Pi but I knew it worked, so the door was already open.” He was able to check his data against a benchmark NASA provided. Knowing that the clocks on his Mars Weather page were accurate meant that Phil could focus on getting to grips with his new single-board computer.

He chose a 2GB Raspberry Pi 4 and official-inch touchscreen with a SmartiPi Touch 2 case. “Angles are everything,” he reasons. He also added a fan to lower the CPU temperature and extend the hardware’s life. Along with a power lead, the whole setup cost £130 from The Pi Hut.

Since his Mars Clock generates a lot of data, he made it skinnable so the user can choose which pieces of information to view at any one time. It can display two types of map – Viking or MOLA – depending on the co-ordinates for the clock. NASA provides a web map-tile service with many different data sets for Mars, so it should be possible to make the background an interactive map, allowing you to zoom in/out and scroll around. Getting these to work proved rather a headache as he hit incompatibilities with the libraries.

Phil wrote most of the software himself, with the exception of libraries for the keyboard and FTP which he pulled from GitHub. Here’s all the code.

He used JavaScript running on the Node.js/Electron framework. “This made for rapid development and is cross-platform, so I could write and test it on Windows and then move it to the Raspberry Pi,” he says. With the basic code written, Phil set about paring it back, reducing the number and duration of CPU time-slices the clock needed when running. “I like optimised software,” he explains.

His decades as a computer programmer meant other aspects were straightforward. The hardware is more than capable, he says of his first ever experience of Raspberry Pi, and the SmartiPi case makers had done a brilliant job. Everything fit together and in just a few minutes his Raspberry Pi was working.

Since completing his Mars Clock Phil has added a pi-hole and a NAS to his Raspberry Pi setup and says his confidence using them is such that he’s now contemplating challenging himself to build an orrery (a mechanical model of the solar system). “I have decades of programming experience, but I was still learning new things as the project progressed,” he says. “The nerd factor of any given object increases exponentially if you make it yourself.”

Willem has been working on a tiny word clock, the Clocksquared Mini:

Summer break is here, and with some time to spare I decided to challenge myself with a project that I call “Clocksquared Mini”. It is Clocksquared, but in a tiny wristwatch package. This gives rise to a major challenge, as everything has to be shrunk down approximately ten times from a 300x300x50 mm to an approximately 35x35x7 mm package. Moreover, running everything off a tiny battery whilst maintaining an acceptable battery life also turns out to be quite difficult.

The 2.4″ I2C OLED display I had sitting idle is too big for the “Promini OLED Clock shield”, yet a perfect candidate for a regular Arduino shield. This is how it looks soldered on a prototype shield with two buttons on top, attached to wsduino running the OLED Clock sketch

Here is another interesting “intelligent” LED matrix display, whose name actually makes some sense (unlike HDSP-2354, among many others): SCD5583A. I reckon it means: “Serial Character Display with 5x5x8 dot matrix”. 3 is the code is for green (0 for red, 1 for yellow).

Nixie tubes: these electronic devices, which can display numerals or other information using glow discharge, made their first appearance in 1955, and they remain popular today because of their cool, vintage aesthetic. Though lots of companies manufactured these items back in the day, the name ‘Nixie’ is said to derive from a Burroughs corporation’s device named NIX I, an abbreviation of ‘Numeric Indicator eXperimental No. 1’.

We liked this recent project shared on reddit, where user farrp2011 used Raspberry Pi  to make his Nixie tube display smart enough to tell the time. 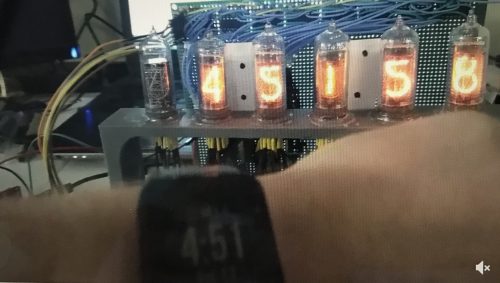 Farrp2011’s set-up comprises six Nixie tubes controlled by Raspberry Pi 3, along with eight SN74HC shift registers to turn the 60 transistors on and off that ground the pin for the digits to be displayed on the Nixie tubes. Sounds complicated? Well, that’s why farrp2011 is our favourite kind of DIY builder — they’ve put all the code for the project on GitHub.

Tales of financial woe from users trying to source their own Nixie tubes litter the comments section on the reddit post, but farrp2011 says they were able to purchase the ones used in this project for about about $15 each on eBay. Here’s a closer look at the bulbs, courtesy of a previous post by farrp2011 sharing an earlier stage of project… 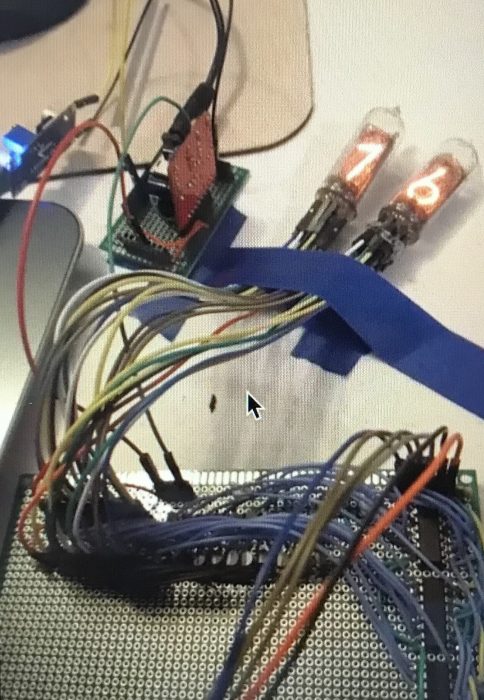 Farrp2011 got started with one, then two Nixie bulbs before building up to six for the final project

Digging through the comments, we learned that for the video, farrp2011 turned their house lights off to give the Nixie tubes a stronger glow. So the tubes are not as bright in real life as they appear. We also found out that the drop resistor is 22k, with 170V as the supply. Another comments section nugget we liked was the name of the voltage booster boards used for each bulb: “Pile o’Poo“.

Upcoming improvements farrp201 has planned include displaying the date, temperature, and Bitcoin exchange rate, but more suggestions are welcome. They’re also going to add some more capacitors to help with a noise problem and remove the need for the tubes to be turned off before changing the display.

And for extra nerd-points, we found this mesmerising video from Dalibor Farný showing the process of making Nixie tubes: