Since we released the first Raspberry Pi camera module back in 2013, users have been clamouring for better access to the internals of the camera system, and even to be able to attach camera sensors of their own to the Raspberry Pi board. Today we’re releasing our first version of a new open source camera stack which makes these wishes a reality.

(Note: in what follows, you may wish to refer to the glossary at the end of this post.)

We’ve had the building blocks for connecting other sensors and providing lower-level access to the image processing for a while, but Linux has been missing a convenient way for applications to take advantage of this. In late 2018 a group of Linux developers started a project called libcamera to address that. We’ve been working with them since then, and we’re pleased now to announce a camera stack that operates within this new framework.

Here’s how our work fits into the libcamera project. 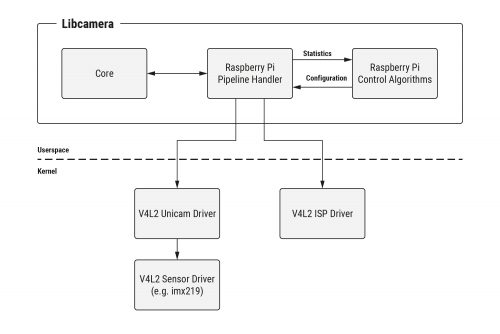 We’ve supplied a Pipeline Handler that glues together our drivers and control algorithms, and presents them to libcamera with the API it expects.

Here’s a little more on what this has entailed.

V4L2 (Video for Linux 2) is the Linux kernel driver framework for devices that manipulate images and video. It provides a standardised mechanism for passing video buffers to, and/or receiving them from, different hardware devices. Whilst it has proved somewhat awkward as a means of driving entire complex camera systems, it can nonetheless provide the basis of the hardware drivers that libcamera needs to use.

Consequently, we’ve upgraded both the version 1 (Omnivision OV5647) and version 2 (Sony IMX219) camera drivers so that they feature a variety of modes and resolutions, operating in the standard V4L2 manner. Support for the new Raspberry Pi High Quality Camera (using the Sony IMX477) will be following shortly. The Broadcom Unicam driver – also V4L2‑based – has been enhanced too, signalling the start of each camera frame to the camera stack.

Finally, dumping raw camera frames (in Bayer format) into memory is of limited value, so the V4L2 Broadcom ISP driver provides all the controls needed to turn raw images into beautiful pictures!

Of course, being able to configure Broadcom’s ISP doesn’t help you to know what parameters to supply. For this reason, Raspberry Pi has developed from scratch its own suite of ISP control algorithms (sometimes referred to generically as 3A Algorithms), and these are made available to our users as well. Some of the most well known control algorithms include:

But there are many others too, such as ALSC (Auto Lens Shading Correction, which corrects vignetting and colour variation across an image), and control for noise, sharpness, contrast, and all other aspects of image processing. Here’s how they work together. 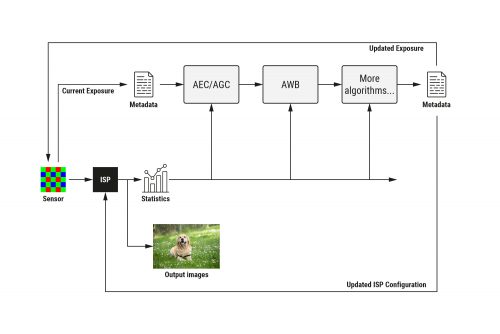 The control algorithms all receive statistics information from the ISP, and cooperate in filling in metadata for each image passing through the pipeline. At the end, the metadata is used to update control parameters in both the image sensor and the ISP.

Previously these functions were proprietary and closed source, and ran on the Broadcom GPU. Now, the GPU just shovels pixels through the ISP hardware block and notifies us when it’s done; practically all the configuration is computed and supplied from open source Raspberry Pi code on the ARM processor. A shim layer still exists on the GPU, and turns Raspberry Pi’s own image processing configuration into the proprietary functions of the Broadcom SoC.

To help you configure Raspberry Pi’s control algorithms correctly for a new camera, we include a Camera Tuning Tool. Or if you’d rather do your own thing, it’s easy to modify the supplied algorithms, or indeed to replace them entirely with your own.

Whilst ISP vendors are in some cases contributing open source V4L2 drivers, the reality is that all ISPs are very different. Advertising these differences through kernel APIs is fine – but it creates an almighty headache for anyone trying to write a portable camera application. Fortunately, this is exactly the problem that libcamera solves.

We provide all the pieces for Raspberry Pi-based libcamera systems to work simply “out of the box”. libcamera remains a work in progress, but we look forward to continuing to help this effort, and to contributing an open and accessible development platform that is available to everyone.

Summing it all up

So far as we know, there are no similar camera systems where large parts, including at least the control (3A) algorithms and possibly driver code, are not closed and proprietary. Indeed, for anyone wishing to customise a camera system – perhaps with their own choice of sensor – or to develop their own algorithms, there would seem to be very few options – unless perhaps you happen to be an extremely large corporation.

In this respect, the new Raspberry Pi Open Source Camera System is providing something distinctly novel. For some users and applications, we expect its accessible and non-secretive nature may even prove quite game-changing.

What about existing camera applications?

The new open source camera system does not replace any existing camera functionality, and for the foreseeable future the two will continue to co-exist. In due course we expect to provide additional libcamera-based versions of raspistill, raspivid and PiCamera – so stay tuned!

If you want to learn more about the libcamera project, please visit https://libcamera.org.

To try libcamera for yourself with a Raspberry Pi, please follow the instructions in our online documentation, where you’ll also find the full Raspberry Pi Camera Algorithm and Tuning Guide.

If you’d like to know more, and can’t find an answer in our documentation, please go to the Camera Board forum. We’ll be sure to keep our eyes open there to pick up any of your questions.

Thanks to Naushir Patuck and Dave Stevenson for doing all the really tricky bits (lots of V4L2-wrangling).

Thanks also to the libcamera team (Laurent Pinchart, Kieran Bingham, Jacopo Mondi and Niklas Söderlund) for all their help in making this project possible.

3A, 3A Algorithms: refers to AEC/AGC (Auto Exposure Control/Auto Gain Control), AWB (Auto White Balance) and AF (Auto Focus) algorithms, but may implicitly cover other ISP control algorithms. Note that Raspberry Pi does not implement AF (Auto Focus), as none of our supported camera modules requires it
AEC: Auto Exposure Control
AF: Auto Focus
AGC: Auto Gain Control
ALSC: Auto Lens Shading Correction, which corrects vignetting and colour variations across an image. These are normally caused by the type of lens being used and can vary in different lighting conditions
AWB: Auto White Balance
Bayer: an image format where each pixel has only one colour component (one of R, G or B), creating a sort of “colour mosaic”. All the missing colour values must subsequently be interpolated. This is a raw image format meaning that no noise, sharpness, gamma, or any other processing has yet been applied to the image
CSI-2: Camera Serial Interface (version) 2. This is the interface format between a camera sensor and Raspberry Pi
GPU: Graphics Processing Unit. But in this case it refers specifically to the multimedia coprocessor on the Broadcom SoC. This multimedia processor is proprietary and closed source, and cannot directly be programmed by Raspberry Pi users
ISP: Image Signal Processor. A hardware block that turns raw (Bayer) camera images into full colour images (either RGB or YUV)
Raw: see Bayer
SoC: System on Chip. The Broadcom processor at the heart of all Raspberry Pis
Unicam: the CSI-2 receiver on the Broadcom SoC on the Raspberry Pi. Unicam receives pixels being streamed out by the image sensor
V4L2: Video for Linux 2. The Linux kernel driver framework for devices that process video images. This includes image sensors, CSI-2 receivers, and ISPs

In our last post, we told you that the Arduino CLI’s primary goal is to provide a flexible yet simple command line tool with all the features and ease of use that made Arduino a successful platform, and enable users to find new ways of improving their workflows.

The Arduino CLI is not just a command line tool, but contains all you need to build applications around the Arduino ecosystem.

For example, you can:

In the video below, we’ll focus on how to start using the Arduino CLI in a terminal session. The tutorial will walk you through setting up all the required tools on your machine to the fastest way to compile and upload a sketch on your target board to allow quick iterations in developing your project with Arduinos.

Using what I learned getting digital audio working on each systems, I set out on a new project I would call “U-AMP” (Universal-Amp). This would be ONE pcb which has the features of seamlessly integrated speakers and headphones with a variety of input sources for digital audio from Wii, PS2, Dreamcast, as well as analog audio input. It does it all. The board is based around the LM49450 IC which I have used many times. The amp is controlled by a PICLF15324; the LF version of the same PIC I use in the WiiPMS.

This project is about 24-bit stereo DAC, which we build for Raspberry Pi boards. This R-2R ladder DAC is developing around Intel / Altera EPM240T100C5N CPLD.
We developed this module after review the PT8211 DAC, which we tested a few months ago. Compare with PT8211 DAC, this module is capable to provide high-quality audio output with Raspbian OS.

Sasa Karanovic posted detailed instructions of how to build a physical dashboard for your PC, that is available on GitHub:

The overall architecture is very simple; There is a python script that is running on a PC and collects CPU, memory, network and GPU usage. Then, it sends that information over serial COM port to the hardware monitor board for processing. New voltage values are calculated and passed to the digital-to-analog converter (DAC) which drives analog dials (galvanometers) by applying a voltage that will move the needle to a desired location. Super simple but it get’s the job done.

In JTAG Debugging the ESP32 with FT2232 and OpenOCD I have used a FTDI FT2232 breakout board to JTAG debug with OpenOCD. With an adapter board on top of the FTDI FT2232 the wiring is much easier and simpler to use.