Whether you are a professor, student or an individual who is wanting to teach or learn more about AI, NVIDIA has released a number of educational resources to support your needs. You can access all the tools below free of charge to get the most out of your Jetson Nano.

The NVIDIA DLI Teaching Kits include multimedia and downloadable instructional materials that provide the foundation for understanding and building expertise in AI. Co-developed with university faculty, courses include Accelerated Computing, Data Science, Deep Learning, and Edge AI and Robotics. Each Teaching Kit includes some combination of:

Qualified educators can also receive codes for free access to DLI online, self-paced training for themselves and their students.

This certificate, open to anyone, recognizes competency in Jetson and AI using a hands-on, project-based assessment. While this track is ideal for advanced learners to build on their existing AI knowledge, beginners can follow the in-depth video tutorials and get up to speed quickly.

This certificate is for educators and recognizes competency in teaching AI on Jetson. This track is ideal for educators or instructors who want to be fully prepared to teach AI to their students. In addition to the instructor certificate, NVIDIA offers numerous instructional tools and many other benefits.

Getting Started on AI with Jetson Nano

This self-paced, online course is designed for developers, researchers, students, and hobbyists. The goal of the course is to build foundational AI skills to enable people to get creative with the Jetson Nano. The course uses Jupyter iPython notebooks and your own Jetson Nano (hardware not included) to build a deep learning classification project with computer vision models. In this course, participants learn to:

To get the materials you need for the course, purchase SparkFun's DLI Kit for Jetson Nano.

Explore the latest technologies and business innovations. Learn from experts how AI and the evolution of the 3D Internet are profoundly impacting industries—and society as a whole. Join NVIDIA for the online conference September 19-22, 2022 and be part of what comes next. Registration is free. Each session is delivered by tech innovators or business leaders using the latest tech advancements to tackle the world’s greatest challenges. Explore real use cases, discover new interests, and get tips from subject matter experts doing groundbreaking work in your field of interest 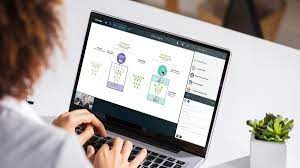 If you’re interested in developing key skills in AI, accelerated data science, or accelerated computing, you can get instructor-led training from DLI at GTC. Full-day workshops are taught by DLI-certified instructors who are experts in their fields, delivering industry-leading technical knowledge to drive breakthrough results.

Looking to get your hands on some SparkFun products that allow you to explore AI? Check out our Machine Learning and AI Concept Kit, a perfect starting point for experimenting in this field. 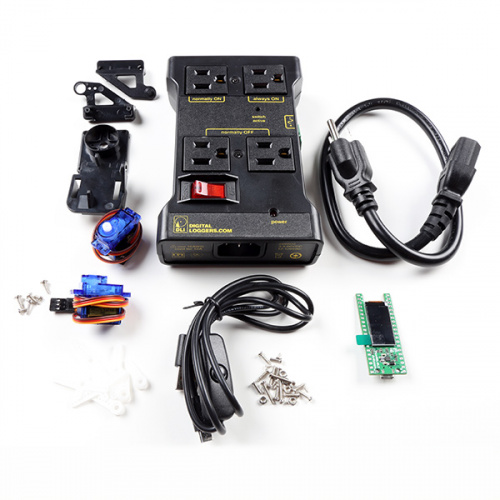 The idea of the Museduino was born in early 2015. The Cultural Technology Development Lab (CTDL), an ad-hoc team of faculty and students in the Media Arts and Technology at New Mexico Highlands University had been grappling with the role of supporting the development of responsive exhibits for museums, historic sites, and traveling exhibits. The team found they were repeatedly making versions of the same thing – different sensors (proximity, capacitive touch, buttons) and actuators – lights, audio, motor movement, video – similar processes with different inputs/outputs. The challenge was often the maintenance, cost, and the footprint size (ie- sensor in a doorway, actuator across a gallery space). So, after lots of discussions and proof-of-concept work, Stan, Rianne, Miles, and Miriam developed the Museduino.


In the summer of 2015, Rianne Trujillo and Miles Tokunow, then graduate assistants leading the project, shipped version 2.0 (1.0 was internal) to some friends who had agreed to try it out. After receiving feedback the team built some “first one is free!” demos for their cultural partners, and continued to develop and refine a modular, open-source Arduino shield with external boards that could respond with no detectable delays using CAT5 cable at distances of up to 100 feet from the central microcontroller.

The team led Museduino workshops at ASTC (Association of Science and Technology Centers) in 2015, Museums and the Web in 2016, and INST-INT in 2017. Since the CTDL was something all members squeezed into their full-time academic schedules, they posted documentation and tutorials as they could, but finding the time to fully document both the technical iterations, code examples, and project demos/tutorials was difficult. The OSHWA Trailblazers Fellowship will be dynamic resource to revitalize the project after 18 months of being away from the lab due to COVID restrictions of state museums being closed.

The OSHWA Trailblazers fellowship will allow the current team, Rianne Trujillo (research/technical lead), Miriam Langer (PI, researcher) and Becca Sharp (graduate assistant, technical assistant, exhibit designer) to update the online documentation (museduino.org and GitHub repository) including tutorials, schematics, soldering instructions, and project examples. Along with this, each team member will be writing a textbook – with case studies from our various projects with museums, national parks, historic sites and installation artists, addressing issues around design, installation, and example applications. This document will be posted on the Museduino site, and distributed through OSHWA, along with partners at a few other universities and organizations.

Like most OSH projects, Musedino’s work would benefit from a larger community of users/practitioners who could modify the work, make changes specific to their needs, and share back to GitHub or another shared repository.

Internally at NMHU, they are working with faculty in the Forestry Institute to help their students work with sensors spread out over a large area (where wireless communication is impractical). It may seem that running CAT5/6 cables is impractical, but it does take some uncertainty out of the hardware setup, and Museduino easily accommodates 50+ meter runs in four directions from the central microcontroller (operating on battery or w/ solar).

Primarily many may think of Museduino as an OSH tool for arts/culture/exhibits – as they say, “The street finds its own uses for things”, or in this case, the forest does (apologies to William Gibson).

Miriam Langer (she/her) is a professor of media arts/cultural technology at New Mexico Highlands University, an Hispanic Serving public institution in northeastern New Mexico. Miriam has been a professor of multimedia & interactivity with a focus on cultural technology at NMHU since 2001. In 2005, she initiated a partnership with the New Mexico Department of Cultural Affairs and has since worked with cultural institutions (museums, historic sites, national parks and libraries) around New Mexico (and elsewhere) to use emerging technology and open source solutions for these organizations. Since 2005, 268 projects have been completed at 62 cultural institutions. She is one of the founders of the Museduino, along with Rianne Trujillo, Miles Tokunow, and Stan Cohen – an open hardware platform for responsive exhibits and installation art. Her partners for this fellowship are Rianne Trujillo, instructor of software design and co-developer of the Museduino and Becca Sharp, an MFA student in Cultural Technology.Museduino.org, cctnewmexico.org

Becca Sharp (she/her) is a physical computing and fabrication artist with different focuses such as conservation and technology as well as technology and mental health. She has created projects using recycled materials, reused electronics and information about climate change, and is currently focused on mental health. During her undergraduate studies she had her first gallery showing and was in multiple art shows. She strives to create her work based around empathy and understanding. Her work often places one in “another’s shoes” to help spread information about current matters that need attention. She works primarily with 3D modeling, video game design, generative art through coding, soldering and physical computing. She has worked with museums and visitor centers around New Mexico including Bradbury Science Museum (2017), Meow Wolf (2018), Jemez Historic Site Visitor Center (2019), and New Mexico Museum of Art (2020). She is currently working on her MFA with mental health and technology as the center of her thesis, she is also teaching a course in her program using open-source softwares Unity 3D and Blender.

Dumpster Dive is Back!

Dumpster Dive is back! A few months ago, we asked how you wanted to hear about Dumpster Dive announcements and we listened. It’s been a while since we had a dive, so mark your calendars for Wednesday, September 14th - and maybe set an alarm or two, just to be safe.

We've gone through our inventory, raided our engineer's offices, and taken unused samples. In doing so, we've found hundreds of pounds of Dumpster Dive material to send you! This year the one-pound boxes will be returning for $30; you’ll find boards, LEDs, kits and more inside! 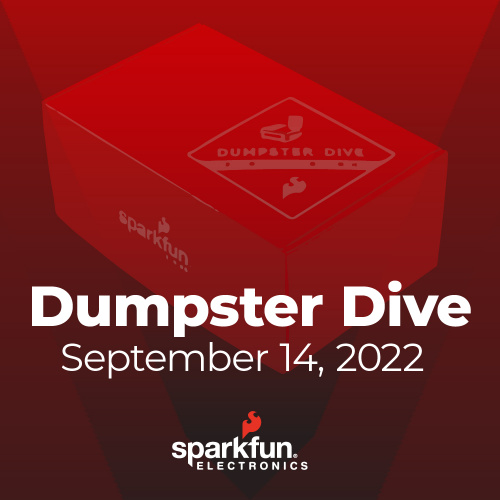 What's a Dumpster Dive? Between samples, customer returns, demo items and old stuff that’s been sitting on the shelves for way too long, we’ve amassed quite a few bins worth of various electronics. It ranges from one-off items, to items that are a little broken or ugly, to items that aren’t worth individually listing and selling. We didn’t like the idea of recycling them, since it could still be useful and worth getting into people’s hands. And so behold: the Dumpster Dive.

Rules for the Dive:

Product will be live until we run out! We will not be returning to the made-to-order format of the past few dives. No backorders will be available.

Unfortunately, we were unable to extend the Dumpster Dive outside of the United States again this year. This decision is still based on shipping restrictions becoming stricter, compliance complications, and material handling safety concerns.

As a reminder: The Dumpster Dive is a gamble and the contents are not guaranteed. We will not provide tech support or returns on any of the goods since many are not products we ever supported, or they might be returns with unknown defects. We will be getting orders out as quickly as possible, but cannot promise same-day shipping. Happy diving!

AnnMarie Thomas, the founder/director of the Playful Learning Lab (PLL) at the University of St. Thomas was awarded the OSHWA Trailblazer’s Fellowship.

The PLL is an undergraduate research lab that focuses on the intersection of Art, Technology, and PK-12 Education. I’m fortunate to work with faculty colleagues from other departments such as Music Education, Physics, and Emerging Media. Over the years some of our projects/collaborations have included:

Most relevant to her work with open source hardware, though, is the Squishy Circuits project. Over a decade ago, Annmarie was wanting a way to teach young daughters about circuits, and with the help of an amazing first-year undergraduate engineering student, Sam Johnson, we created a method for building simple circuits that relied on two recipes for homemade sculpting dough; one that was very salty (and conductive) and one that was not salty (and worked as an insulator for electricity.) We decided to share all of our recipes and parts lists on line, and the team was amazed by how quickly the idea was embraced by teachers and parents around the world. This was the Playful Learning Lab’s first foray into open source hardware (or as we preferred, “open source squishy ware.”) This work led to the creation of a company, that is run by a former PLL member.

The focus of the yearlong trailblazer’s project for her will be examining the what and the where of Open Source Hardware in PK-12 Education. Her team of undergraduate researchers, overseen by Annmarie and my PLL faculty colleagues (Douglas Orzolek, Jeff Jalkio, and John Keston) are undertaking a large-scale literature review process to see where PK-12 usage of Open Source Hardware is showing up in scholarly peer-reviewed publications. They will also be compiling in-depth case studies on how some of these projects were developed in academic settings (by faculty and graduate/undergraduate students.) PLL are also aware that many of the teachers and extracurricular programs that use open source hardware are not publishing this information, so PLL will also be developing and distributing surveys to educators in hopes of getting a fuller picture of the ways in which they use open source hardware, and why.