A few weeks ago we announced that Elektor Magazine was releasing a free, bonus edition of their magazine filled with five extra articles from our SparkFun guest-edited edition! The last article was released last Friday, and you can now download the complete bonus edition. 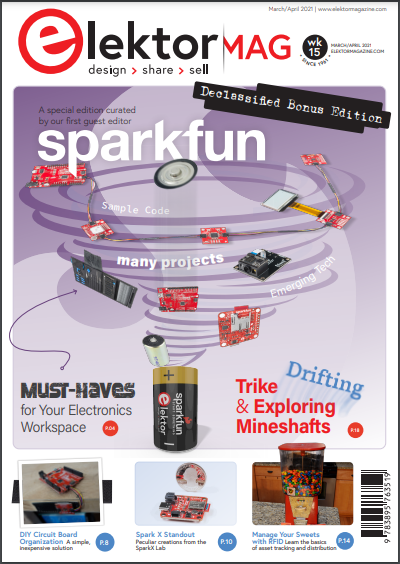 Curious about what’s inside?

If you’ve been enjoying our guest-edited edition of Elektor (and the bonus edition), check out their site to sign up for a subscription. New subscribers can get a free first issue for either their Gold (print) or Green (digital) memberships when you sign up for a one-year subscription! Learn more and start your subscription over on Elektor - and use the promo codes below until May 9th!

Our friend Mike Perez at Audio Arkitekts is back to show you how to build PiFi, a Raspberry Pi-powered Roon Endpoint Music Streamer. The whole build costs around $150, which is pretty good going for such a sleek-looking Roon-ready end product.

Roon is a platform for all the music in your home, and Roon Core (which works with this build) manages all your music files and streaming content. The idea behind Roon is to bring all your music together, so you don’t have to worry about where it’s stored, what format it’s in, or where you stream it from. You can start a free trial if you’re not already a user.

Simple to put together

Fix the HiFiBerry DAC2 Pro into the top of the case with the line output and headphone outputs poking out. A Raspberry Pi 4 Model B is the brains of the operation, and slots nicely onto the HiFiBerry. The HiFiBerry HAT is compatible with all Raspberry Pi models with a 40-pin GPIO connector and just clicks right onto the GPIO pins. It is also directly powered by the Raspberry Pi so, no additional power supply needed.

Next, secure the bottom half of the case, making sure all the Raspberry Pi ports line up with the case’s ready-made holes. Mike did the whole thing by hand with just a little help from a screwdriver right at the end.

Download the latest RoPieee image onto your SD card to make it a Roon Ready End Point, then slot it back into your Raspberry Pi. Now you have a good-looking, affordable audio output ready to connect to your Roon Core.

And that’s it. See – told you it was easy. Don’t forget, Audio Arkitekts’ YouTube channel is a must-follow for all audiophiles.

Your favorite device has just run out of juice, so you quickly take off the cover and reach into that old stash of alkaline batteries you have lying around. After trying countless combinations, you still cannot be sure they’re working properly, as each one has been slightly used. If only there were a way to know.

In comes a maker named Moragor with his take on a battery analyzer. The one he built doesn’t just measure the voltage for a certain type of battery. Instead, users can select from three different types (alkaline, NiMh, or Li-on), along with the current from a sleek OLED display. Then, values get read, shown, and also logged to an SD card for more advanced analysis. The entire device is based on a custom PCB that acts as a shield for an Arduino Mega.

Moragor might have gone a bit overboard, however, as he eventually got around to testing 25 different types of alkaline batteries! After measuring four batteries from each brand with discharge rates of 100mA and then 500mA, he was able to create this neat little chart that shows the energy loss from high current consumption. As seen below, there were a couple of standouts that lost nearly 60% of their energy at 500mA vs 100mA.

You can check out Moragor‘s write-up for more information on exactly what components were used and how it was made, plus all the detailed battery analysis one could hope for.

There’s a brand new device-to-device communication feature available now in the Arduino IoT Cloud. It’s something we’ve been working on for a long time. So we’re excited to see how it’ll add a whole new connected dimension to your Arduino projects.

What is “Device-to-Device”? Communication?

Internally we’ve been looking at this feature as “device-to-device” communication. It will allow your Arduino devices to send wireless messages to each other, without writing a single line of code or spending time with radio modules and network protocols.

Using this feature you can link variables of the same data type between two or more cloud-enabled devices. For example, one button could set three smart bulbs to the same color. Or you could turn on a heater when temperature sensors in your room or outside in your weather station drop below a certain level. Being able to sync variables gives you an intelligent way to control multiple devices very easily.

Whether you use an Oplà IoT Kit, a MKR WiFi 1010, a Nano 33 IoT or an (upcoming!) Nano RP2040 Connect, you can configure everything from the web interface. After configuration, any changes you make to variables on one device will be reflected promptly on the other(s). This creates a seamless, powerful and secure two-way communication with almost no effort on your part, and no code required. The Arduino IoT Cloud handles authentication, security, network disruptions and any other tricky parts.

What Does This Mean For Your Projects and Devices?

It means there are lots of options with thing-to-thing communication (also known as variable synchronization):

Are you thinking about home automation? Interactive installations? Monitoring and controlling machines from a wireless panel? This powerful new feature makes all those things easy to achieve for makers of all abilities.

Combined with IoT Cloud’s dashboards this delivers a powerful new way to build incredible automations with minimal (if any) changes. Furthermore, it gives you smartphone control of your connected boards via the existing Arduino IoT Remote iOS and Android apps.

If you want to be one of the first to try it out, grab an Arduino IoT Cloud subscription. After that, just make sure you’re signed up to the Arduino newsletter to hear about other new features.

The post It’s easier than ever to add two-way communication to Arduino devices appeared first on Arduino Blog.

Resisting the desolate consumerism of the suburbs is a serious business for hardware hacker Zack Freedman. Zack transformed a Raspberry Pi 400 into the Voidstar Data Blaster, a portable cyberdeck to fight against becoming a normie.

Hang on, what is a cyberdeck?

“A data blaster [cyberdeck] is the trademark battlestation of console cowboy antiheroes running nets through cyberspace.”

There’s a whole subreddit devoted to exploring what does and does not make a real-life cyberdeck, so if you were looking for a rabbit hole to go down, knock yourself out.

How do you turn a Raspberry Pi 400 into a cyberdeck?

Added features to transform a Raspberry Pi 400 into the Voidstar Data Blaster include:

Handles make the cyberdeck nice and portable. Console cowboys can also use them to flip the deck up onto their forearm and easily “jack in” to cyberspace.

Rules around which keyboard you can use on a legitimate cyberdeck are pretty tight. It can’t be touchscreen (because that means it’s a tablet); however, it can’t fold away on a hinge either (because that makes it a laptop). Enter Raspberry Pi 400, a computer built into a mechanical keyboard about the length of an adult forearm. Perfect.

The SDR receiver means that users are cyber snooping-ready, while the head-mounted display provides a cyberpunk design flourish. That display acts as a second screen alongside the mini touchscreen. You can drag anything from the main display into sight on the headgear.

A lot of trial and error with a 3D printer finally yielded a faceplate that allows the screen and headgear to fit in perfectly. Zack also designed and printed all the flair and logos you see stuck around the cyberdeck. LEDs make the decorative filament fluoresce. Integrated pegs keep all the wiring neat – an inspired practical addition.

Here are all the STL files if you’d like to create your own cyberdeck. And the design files let you take a closer look at a 3D render of Zack’s creation.

We saved the best bit for last: not only can you play Doom on the Voidstar Data Blaster, you can play it on the wearable display. Stay punk.

App note from ON Semiconductors about the need for long cables for high speed Type-C and Type-A connectors. Link here (PDF)

With the increasing requirement for high speed transfer of larger bulk of data, better quality video and power delivery, change over from analog to digital videos, bi−directional transfers, it become essential to use a proper cable that delivers the data correctly between external hard drives and other systems or end products.
The use of Active cable becomes a necessity with increase in cable lengths of more than 5 meters, number of ports and data rates 10 Gbps and above. To match these using passive cables will become expensive with increased weight and thickness.